Back in August, I wrote a piece called “The Truth About Stefan Molyneux”. The title was a slightly ironic reference to his many videos referring to the “Truth” about the subjects he chooses to address.

Something I tried to articulate in my previous articles and wish to emphasize now is that I believe that my differences with Molyneux are not so much because I am somehow “ideologically opposed” to him or because I’m a “hater” (both accusations levied at me that week) but rather that I’m concerned about his premises, self-serving “logic” and troubling conclusions. I worry that all the incredible good he did for the liberty movement is in the past, and much of his notable present work is not only destroying the credibility he had, but also damaging the credibility of a movement I love.

I was not the only public “critic” that happened to post that week in August; I had actually written mine as a response to an article which was removed from Buzzfeed following “complaints.” The next few days were a surprising explosion of activity on my article and others. A slew of people (including myself) found they were blocked from Molyneux’s Facebook page simply for sharing any of the articles or entertaining a discussion that cast Molyneux in a negative light.

Let me state clearly for the record, that there’s nothing wrong with choosing with whom you interact and opting to limit the things you choose to see. Though I personally don’t block people on social media, I know that it can reduce the amount of rage, frustration and annoyance for many, so I wouldn’t begrudge someone the ability to block people or things from their Feed that they don’t wish to see.

I do, however, have a problem with censorship.

Just a day or so after my article was posted, Michael DeMarco, Molyneux’s Director of Operations over at Freedomain Radio, filed complaints with YouTube regarding a series of videos produced by TruShibes, a YouTube creator who took clips of Molyneux’s radio show and provided commentary and analysis. I used a number of these videos in my links on the article I wrote, to illustrate examples of things he said that I found problematic or worth addressing.

Those videos, and eventually the entire channel, were removed from YouTube.

The first problem with this is a simple personal annoyance: my article, which relied on many references, was visited many times the day of and after those YouTube videos were shut down. As a result, my piece was incomplete, and it wasn’t for a couple of days when someone created a Mirror of TruShibes’ account that I was able to fix all the broken links and have a complete article.

The second problem, however, is one of ideology. The method by which Michael DeMarco went to remove TruShibes’ video off the website was by Digital Millennium Copyright Act (DMCA) complaint. 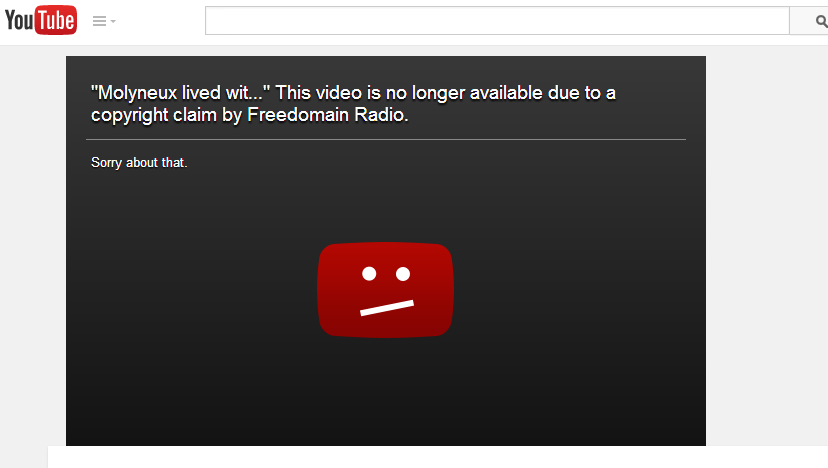 As many in the liberty scene have noted, the DMCA is two things: it is the “initiation of force,” as well as intellectual property (IP) protection. Many libertarians are on the fence regarding intellectual property, but Molyneux, an anarchist, doesn’t appear to be one of them — he’s made his  anti-IP views clear in numerous videos and posts. The fact that he would use governmental IP claims to censor a critic is baffling to many of his supporters and far from consistent with his ethics by his own reasoning.

When, understandably, fans and observers asked why Molyneux would assert copyright claim and use government force when he supposedly is opposed to either one, DeMarco stated in a post:

“I received messages from several listeners about their calls/images/videos from participation in our shows being used to bully them online. This was spread across two different channels and they asked if I could have the content removed. Going after listeners is completely unacceptable and I used the methods at my disposal to remove the material. If you attack listeners, you don’t get to use any of our material. That’s the line.”

Further, when Molyneux was questioned by Joe Rogan while a guest on The Joe Rogan Experience, he stated that the videos were taken down due to alleged “doxxing” of featured callers. I was not aware that Molyneux had ever been particularly concerned with caller privacy before, and his public videos and podcasts from which any quotes were drawn are still up and available. The videos that do fit the description of the claim he made were not the videos I referenced, as I would never condone public harassment, abuse or “doxxing.” The video series I linked to, by TruShibes and others, had nothing to do with doxxing or bullying. He has still provided no explanation for their removal.

The biggest problem, however, is that there is an established process in the case of abuse stemming from a YouTube video. YouTube has an abuse/harassment policy in place. I would know. Full disclosure: I actually work with YouTube daily as part of my job, which is how I learned the next few details.

A DMCA complaint is only filed in the event of a copyright violation claim. The form is available on YouTube’s website. You must agree to the following conditions before submitting the complaint:

It is entirely within YouTube’s private Terms of Service, Community Guidelines, and partnership agreements between their creators that they can delete a YouTube channel that violates their policies. It deleted the TruShibes account when DeMarco complained. It should be noted that the creator of Tru Shibes, J. Raven, has responded to Molyneux’s censorship of her criticism with a lawsuit. The text of the lawsuit is available online.

Regardless of Raven’s actions or the results of the lawsuit, Molyneux could easily be found in violation of YouTube’s Agreements by YouTube itself. False claims are easily considered “abusing the system“. If and when YouTube gets around to reviewing his claims, he could have a problem: due to violation of his private contract with YouTube, his channel could be deleted at any time.

I’m sure a few of Molyneux’s critics may be pleased to discover this fact. He attempted to censor a critic using government force, it’s remarkably ironic that he may have censored himself in the process of doing so.

At the end of the day, the concept of his channel being deleted actually makes me uncomfortable, even if the reason it could happen is due to his violation of a private contract. There are a handful of videos of his I have saved in the event that it happens. He has certainly had a couple that I can agree with and would even like to share with others. I do feel that he has been an articulate voice for a cause it seems like he’s since abandoned. Even some of his fans, with whom I’ve spoken on these subjects, quietly complain that he’s gone “off the deep end” on numerous topics and strayed far from actual liberty philosophy, to his detriment.

I’m not here to try to destroy a fellow libertarian. The only way I want to see Molyneux’s problematic content “gone” is by Molyneux changing his mind, and deleting it himself. Or by it fading into complete irrelevance as his fan base leaves him for more principled individuals. The man is tremendously unforgiving, and by his own arguments, he has proven himself worth disregarding. However, I don’t live by Molyneux’s logic. I recognize that he is human, and flawed, and that doesn’t make him so “damaged” that he cannot be redeemed. I still like many of his old videos and the very occasional recent one. I still consider him intelligent, articulate, and useful—I’d just prefer it if his good content clearly outweighed his bad.

I never want to see dissent silenced in oppressive ways. Perceived oppression leads to victim mentalities, and Molyneux has plenty of his own victim mentality already. I want to change people’s minds, not crush them to comply or censor them to silence. That doesn’t seem very libertarian, where the market of free thought should be determining the best ideas.

I think of censorship as being anathema to liberty. Freedom of speech and expression are essential to a free people and to libertarianism. We must be able to dissent, to disagree, and to dispute the assertions made by authority or those who claim to be the authority on a subject. By censoring those who oppose us, we lose the chance to have honest dialogues and challenge assumptions.

A free world is inevitably going to involve diverse ideas, and people coming to conclusions you might not – it’s how we are able to progress in philosophy and science and understanding everything around us. I am tremendously wary of people who claim to love liberty and freedom who would censor their critics. The beautiful anarchy that Molyneux and others discuss would be a world where many different ideas will flourish, and I wonder how he’ll manage his intolerance when he doesn’t have the government as a thug for hire. I can’t see it as an easy way to live, but he can believe and assert what he wants. In fact, I encourage everyone to try on different ideas for size, I just hope they don’t try forcing the ideas that fit them best on others.

As the quote often attributed to Voltaire, but was actually by Evelyn Beatrice Hall says:

“I do not agree with what you have to say, but I’ll defend to the death your right to say it.”

I’m not the sort of critic who wants to see him silenced. I don’t believe that’s intellectually honest or useful to the movement. I want to see him held responsible by his fans and his viewers to make higher quality content, I want to see his problematic works called out. I want to see him apologize for what he did to TruShibes YouTube channel. I want to see him redeem himself with videos as unifying, thought-provoking and inspirational as “The Story of Your Enslavement“.

I sincerely hope that at some point, Molyneux rejects convenient methods of oppression such as censorship of dissent and threats of violence. It’s really hard to watch someone who has articulated how problematic these things are turn around and use them – and the harshest consequence of all of it could come from his violation of a private contract. By invoking government force, Stefan Molyneux grabbed the gun in the room, and if he shoots himself in the foot, the only person responsible for that is him.